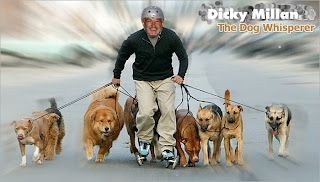 Yes it's true, Dicky is the real Dog Whisperer. As a child Dicky would hang out with the monks in Collon and this is where he first came across Collon animal shelter and his love for the dog.
Mastering his skills took an extensive training regeme which the monks in collon helped a great deal. Dicky was amazed at the monks code of silence and this gave Dicky a sensory overload. Dicky began to study the Koran,The Kamasutra,The littlest Hobo and Lassie and this is how he became the Dog Whisperer we all know. Thats where Dickys famous phrase came from "If the monks can do it, I can"
Dicky took his skills to L.A and the rest is history.
You Go Dicky !!!
Posted by The Ardee Man at 1:43 PM