My Interview with Galadriel Masterson of Pretty Boys 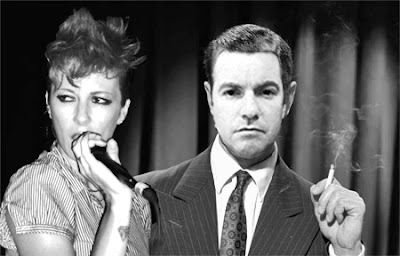 HELLO BONJOUR
The Ardee Man Shane-Gorman here with my first celebrity interview.
Years  ago my wife Molly took me to see the Pretty Boys concert, I didn't know anything about the group other than that Molly really liked the band. So we headed of to Mercury lounge that evening, it was a hot summer night and a cool beer at the bar was just the ticket, when we walked in to the venue Molly spotted  Galadriel at the bar, so me being bold of course I had to go and get a picture taken with three members of the band which was awesome.
Need I say the show was awesome......Molly found Galadriel on Facebook and so me being bold of course I had to friend her too, which she accepted. Month's and month's ago I had sent an email to Galadriel asking her would she mind if I did a blog about the Pretty Boys and she said of course but I never got around to doing it. Last week Galadriel asked me for a couple of tips about blogging and mentioned that I never did the blog about the band,one thing lead to another and.....................................................
1.How did the band Pretty Boy's get together ?
First came a very determined group called Candy Ass. In Candy Ass we were just girls but then we grew up and no longer wanted to sing about jailbait, pussywhipped or how bullets bounce off but love sticks like glue. Ha! Some of the origz moved to Europe, another one got knocked up but a few of us started writing new, top 40 pop inspired songs along with production team Super Buddah and after a handful of songs had been written and recorded Pretty Boys was born.


2.Where was your favorite venue to play ?

I had such an amazing time at CBGB's. Energetically that stage held so much magic and I felt wild n fun up there. But I have to say my fave fave fave was a 3000 seat ampitheater in Pheonix, AZ. I will remember the moment of stepping on that stage on a warm summer nite for the rest of me days!
3.How did you come to meet Pink and where you all starstruck or did you play it cool.

Pink saw us play at some shit hole in Hollywood and asked us to go on tour with her as her opening act. We first actually met at the first show and I tried to act hilarious although inside I was omg'ing. A long lasting bond was formed on that tour.
4.Who is hotter, Princess di, or Kate Middleton.

Kate Middleton looks like she enjoys herself some bevvies and kinky sex combined with a love for the outdoors so of course I already adore her. However, no one can light a candle to Princess Di.
5.If an elderly lady was walking your dog and both old lady and dog where gonna get mowed down by a bus, would you choose to save the old lady or your pup ?

My puggy is my number one. Humans can fend for themselves but pups are 100% relant on their humans. Plus that old broad has lived a long life and my pugs adventures are just beggining.

Scrambled cage free, free range, organic, veg fed with a side of sauteed kale please. Thankyou.
7.What was the moment that stuck out the most in your time with Pretty Boy's

When we walked into the airport in London and felt so victoriously like all the hard work has paid off and it was our time. We were headlining a festival and had 7 major labels confirmed to come see us. I literally did a victorious YESSS! when we walked in. 30 minutes later we were being fingerprinted and mugshot and thrown in a holding cell.
8.Most embarrassing moment in Pretty Boy's

I've racked my brain and I think the embarassing stuff belonged to Candy Ass either that or I've just blocked it out and remember all the fun and creativity.
9. Iv'e seen you taking you shoes off on the stage while performing, where you not afraid of maybe standing on glass, snot's or random spit's that may have been left there from the last performers.
You aren't human on stage so you don't think common things like that and you are full of fearlessness. Ok that's a lie sometimes mid hip thrust and high note I would think oh shit I didn't pick up my laundry today now I don't have clean skintight jeans for tomorow.

We had so much fun and so much success (Hello Bonjour beat out 2 other bands by 30k votes thru a contest with Glamour Mag and Mercedes and we won a 100g budget for a the video, HBJ was number one on a Sirius Satelite station, itunes and merch sales were the amazeballs, touring was a blast etc etc) but guess what after ten years we all still had day jobs and that was not the goal so we got tired of fightin for what we wanted and decided to end on a high note and all pursue some other creative projects in our lives. We went gangbusters after the London incident and recorded what was to be the start of our next full length titled Stereo Pirates. Attached are three songs from that LP.

11.Do your dogs sleep in the bed ?
Where else would they sleep?
12. Will Pretty Boy's ever get back together again. ?
Nope.
Posted by The Ardee Man at 6:26 PM