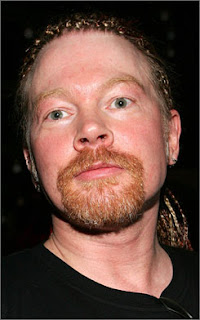 Years ago in the early 70s Axl Rose as a young boy found work in a mental home for munchkins, trying to scratch some money together so could but his first guitar, it actually is the guitar that he wrote some of Guns N Roses biggest hits on. Anyway he wasn't earning to much money so he came up with the idea of trying to get 100 new munchkins into the hospital in a week.More munchkins more money he said to himself. Desperate for his guitar he hit the streets carrying a big box and a fishing net. He set all kinds of traps to catch the munchkins, i remember one of the traps was an elaborate mechanism of ropes and pulleys and it involved a bag of Monster Munch and a Marathon bar. He would lure them in one by one on his quest for 100 munchkins. As the days went by he was on the way and he could almost feel the strings of the guitar in his hands. At this stage there wasn't to many munchkins left in LA, ya know it's not the yellow brick road, but he plowed on until finally he had captured 99 munchkins and put them in the mental home. With one day left Axl scowered the LA streets but to no avail. He passed by the music shop where the guitar was placed in the window with a tear in his eye he wrote these lyrics " all i need are some little patients, yeeaahh "
Posted by The Ardee Man at 3:41 PM

Email ThisBlogThis!Share to TwitterShare to FacebookShare to Pinterest
Labels: jokes